Millwall vs QPR at The Den

It's all over at The Den, where Steve Morison's 55th-minute header has decided matters. Reaction to come on www.qpr.co.uk ...

After Freeman won a corner for Rangers, his resultant set-piece is nodded just inches wide by Smith.

Play is now switching from end to end as Rangers go in search of an equaliser late on.

Holloway throws on David Wheeler for Sylla. Millwall have also just brought on Fred Onyedinma in place of Gregory.

From Wallace's edge-of-the-box blast for Millwall.

Rangers' second of the evening, as Aramide Oteh is introduced for his senior QPR debut. Osayi-Samuel departs.

Mass' low 20-yard effort is spilled by Archer, but the home 'keeper just about recovers to claim the ball at the second attempt.

QPR's Bright Osayi-Samuel shoots into the arms of Archer from 16 yards.

First of the night for QPR. Matt Smith replaces Wszolek.

Rangers trail in south London. Wallace sends over a hanging right-flank cross for Steve Morison, who powers home a header at point-blank range. 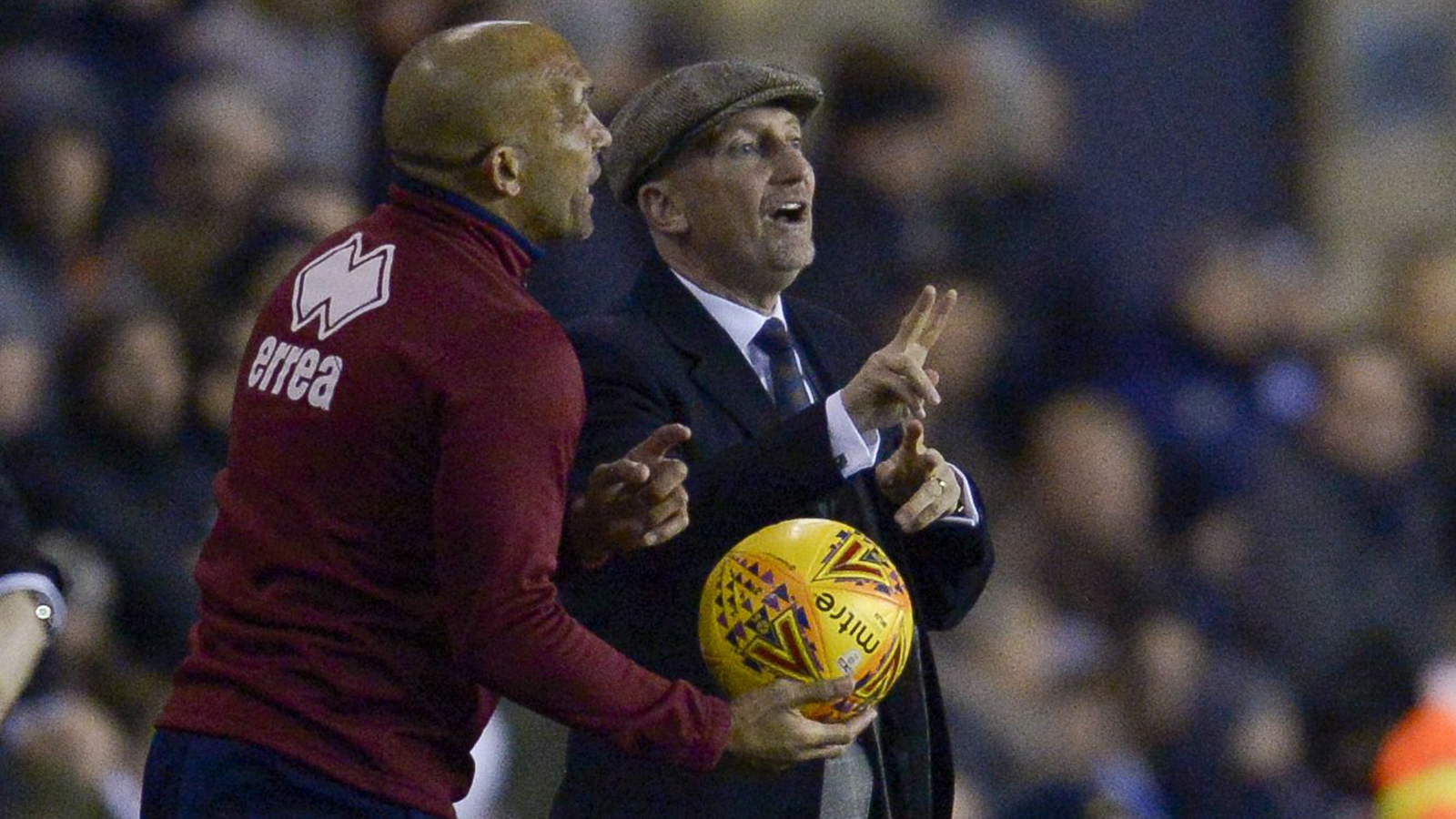 Ian Holloway wills his charges on here at The Den. Still 0-0 currently.

QPR's Wszolek is cautioned for a late tackle.

Jordan Cousins gets to the byline for the R's before pulling the ball back to Luke Freeman, whose header is comfortably caught by Archer.

We're back underway at The Den. Come on, Rangers!

Referee Keith Stroud calls time on first-half proceedings. The second half is coming up ...

It's been a lively first period at The Den, but we're still without a goal as half-time looms large.

Baptiste's right-wing cross finds Bidwell unmarked at the back post, before his header is pushed away by Lions goalkeeper Jordan Archer!

A tidy Millwall move ends with Jed Wallace breaking into the box with the ball, but he can only fire at the side-netting.

Rangers' Alex Smithies dives to his left to fashion an excellent stop from George Saville, after the ball broke to the Lions midfielder in the box. 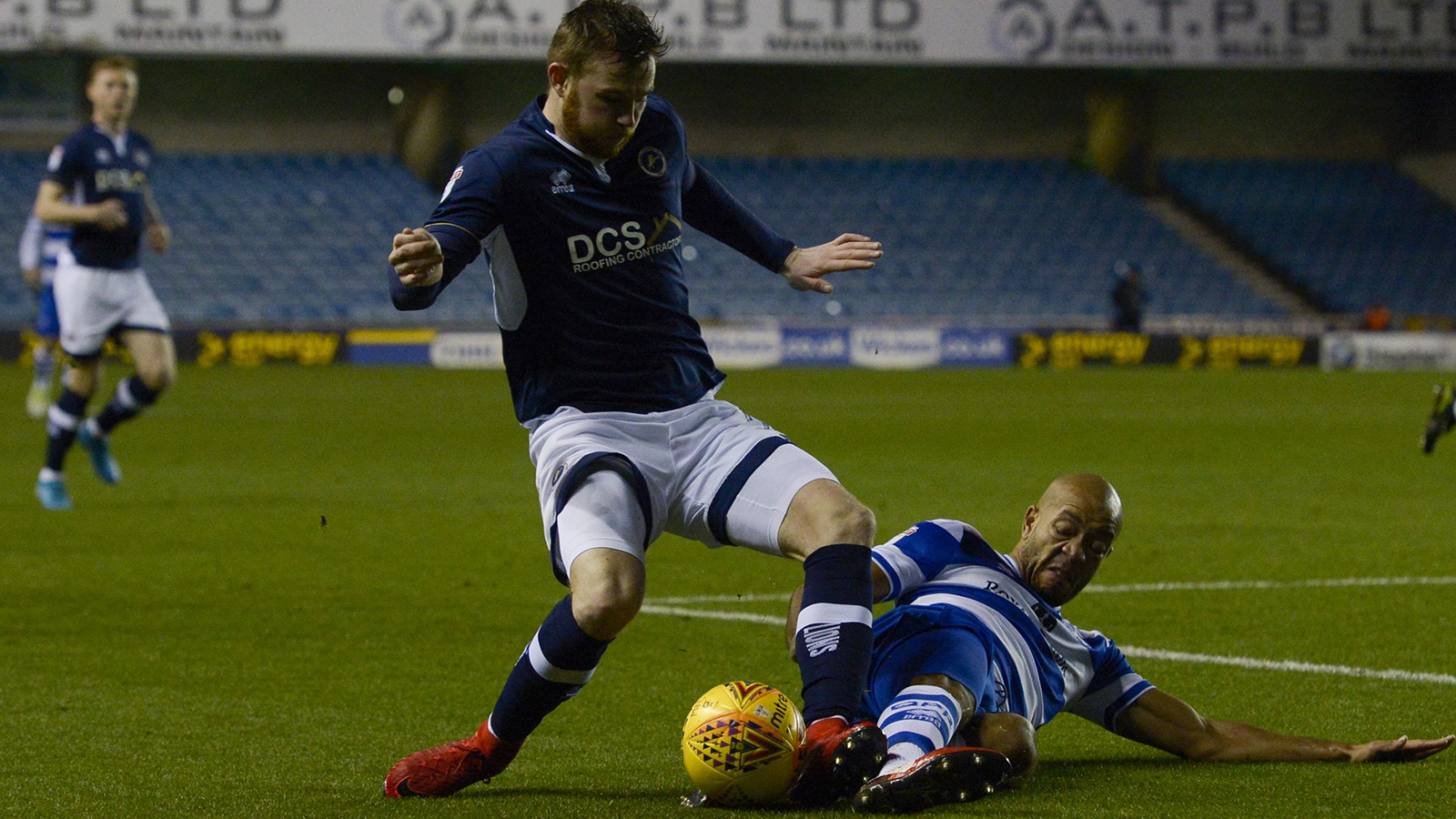 Rangers' Alex Baptiste slides in to try to win possession for the R's.

We've passed the midway point in the first half here at The Den, where the Hoops have probably edged proceedings thus far.

This time it's Jake's turn to send another distance effort over for the R's.

The ball falls to Pawel Wszolek 25 yards from goal following a free-kick from deep, but the Polish international winger can only send a half-volley past the left-hand post.

Jake Bidwell's superb cross-field pass for Rangers is chested down by Idrissa Sylla in the box, but his subsequent shot is blocked.

With the first attempt of the contest, Millwall's Aiden O'Brien shoots off-target from close range.

No chances as yet, but the R's appear to have come out of the traps quickly.

We're off and underway at The Den - where the atmosphere for this London derby really is electric. COYRS!

⚽️ The #QPR players go through their pre-match warm-up routines ahead of kick-off. #MILvQPR pic.twitter.com/eSPDHJdZxF 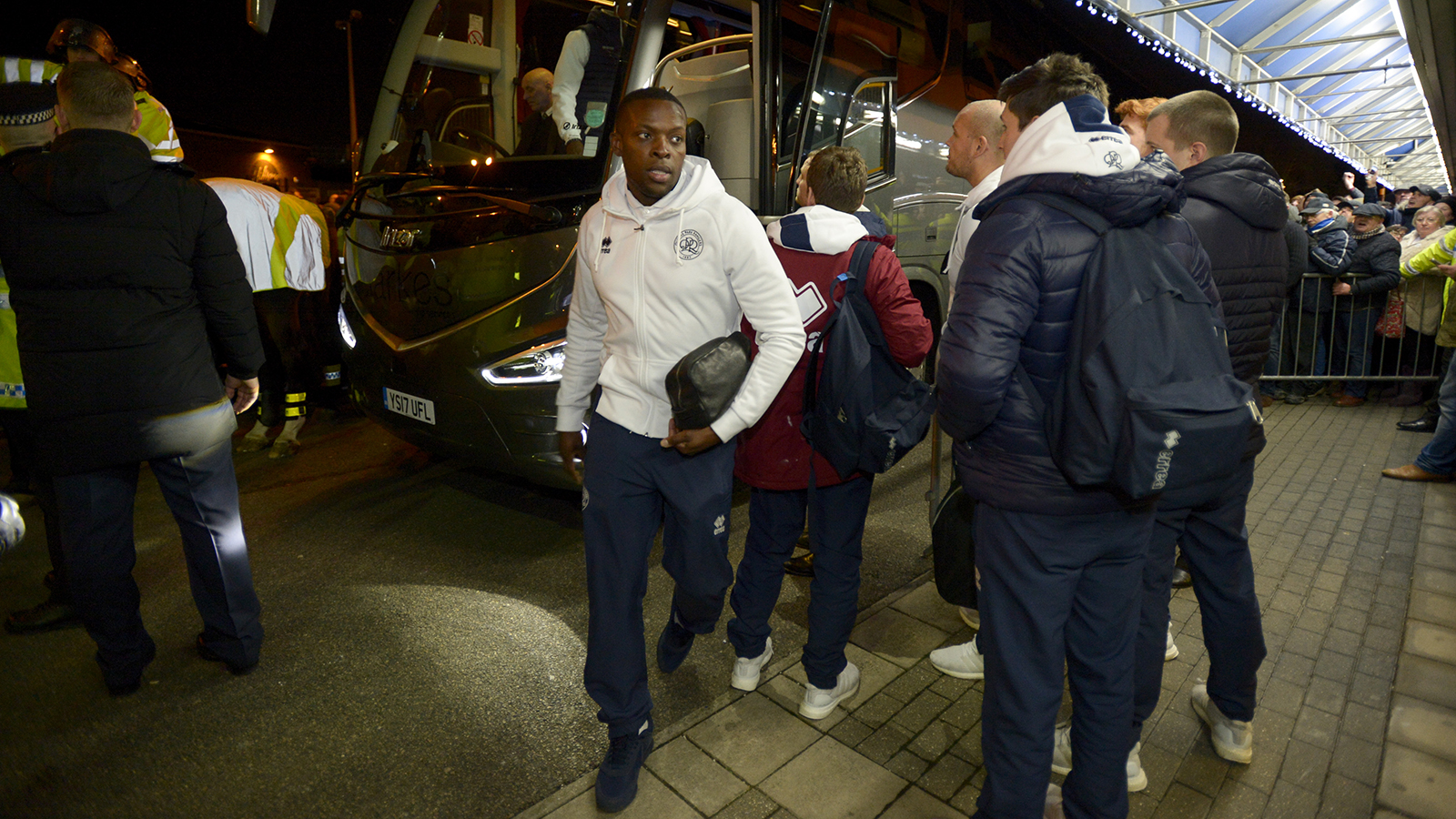 R's skipper Nedum Onuoha leading the team into The Den a little earlier.

Kick-off for this London derby is just over half an hour away. 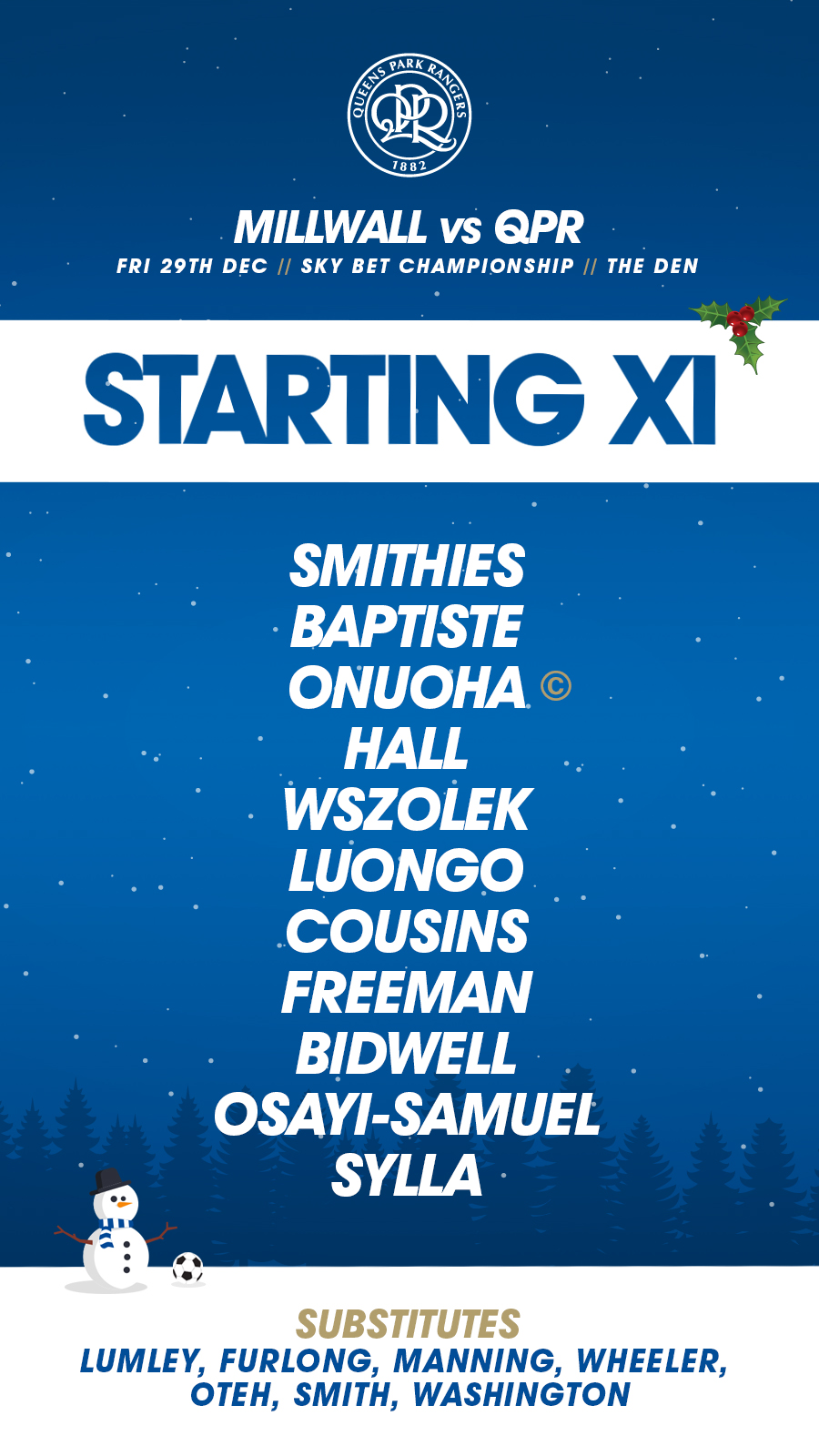 Two changes for the R’s, then, following the 0-0 Boxing Day draw at Ipswich Town.

So Grant Hall makes his first start in almost nine months, after being sidelined with tendonitis, while Bright Osayi-Samuel also comes back into the starting line-up.

Welcome to The Den ahead of #MILvQPR. The action gets underway at 7.45pm! ⚽️ pic.twitter.com/8Dq6KH6PuY

🎫 #MILvQPR tickets are now off sale.

Please do not travel without one. pic.twitter.com/2aE2HWboPf 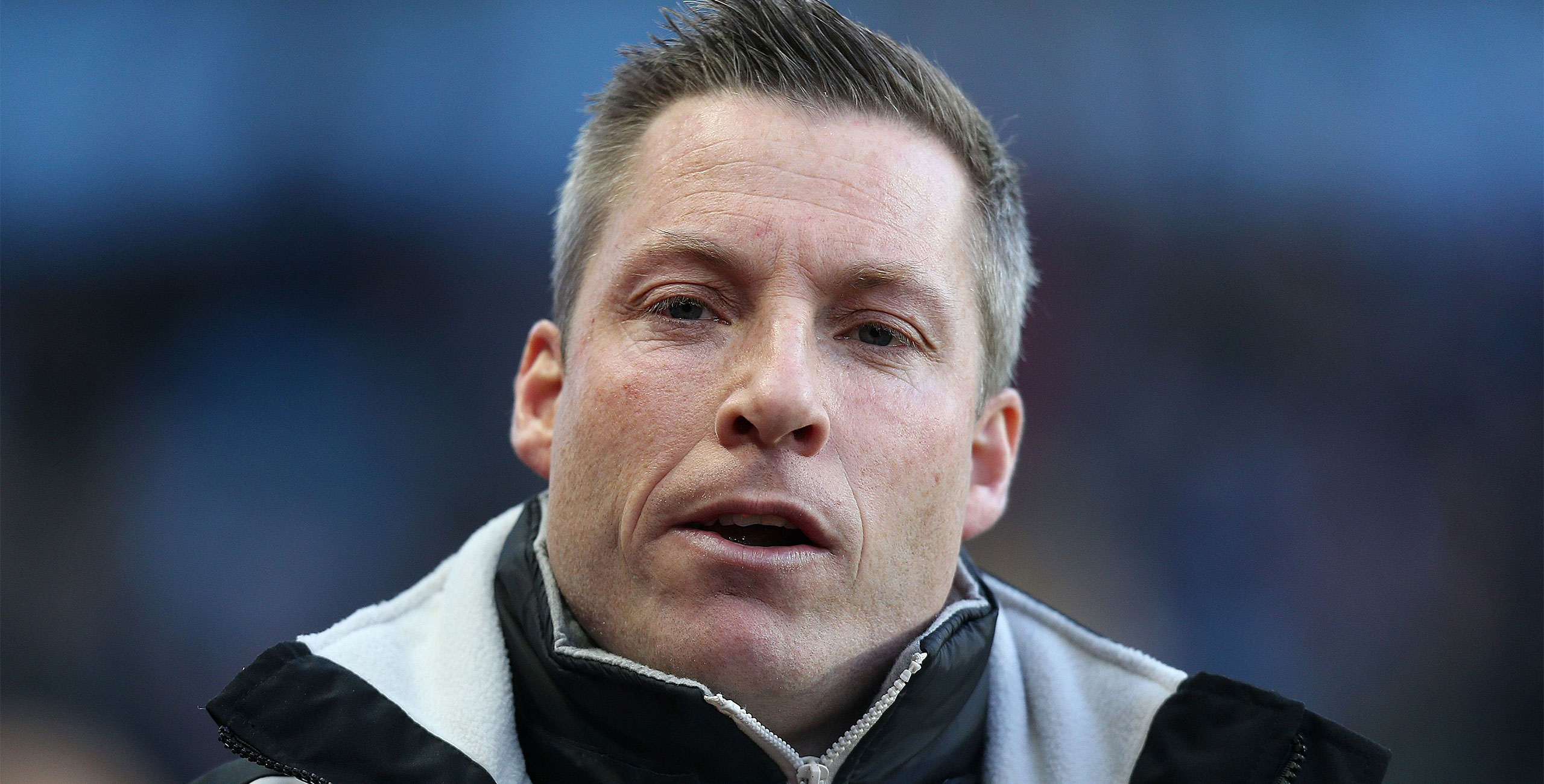 "The fans are looking forward to Friday – I think we’re almost sold out. That goes to show how excited we are for it. The atmosphere will certainly be electric, it’ll be hostile. I think that’s because it’s a London derby, first and foremost, against QPR. It’s two teams in a similar position and what a great one for the players to be involved in."

We're off to Millwall this evening as the R's look to stretch their unbeaten run to four matches.

Stick with us throughout the day for behind-the-scenes content, updates and insight.